If one or more of your subscribers didn't receive your broadcast email as expected, here's what to look for.

Written by Ben
Updated over a week ago

Subscriber didn't receive a broadcast, but you're not sure why?

You're in the right place!

PLEASE NOTE: This article is on troubleshooting broadcast sending specifically, but we also have similar guides for sequences & incentive emails.

In this article, we'll go over how to determine whether the broadcast was delivered (or attempted to be delivered) to that subscriber, plus how to troubleshoot why they may not have received it.

The first thing to check for is whether that broadcast shows up in the email history on the subscriber's profile.

Then, click on the subscriber from the list of results to view their profile. You'll be on their email history tab by default:

On that tab, all of the emails that this particular subscriber has been sent from your ConvertKit account will be listed in chronological order.

Scenario 1: the broadcast does show up in their email history

If you're able to locate the broadcast in question in their email history list, then the next step is to hover over the icon to its right to reveal its status.

We'll go over each potential status in turn:

There are multiple reasons that can cause a broadcast to bounce. Some are just temporary issues (for example, the subscriber's inbox being full). To learn more about bounces and why they can occur, click here!

If a broadcast failed to send, please reach out to us including the subject line of the broadcast and the subscriber's email address. We'll investigate possible causes behind-the-scenes, on your behalf.

If a broadcast has a status of 'Sent', it means we sent it, but the recipient's email provider hasn't sent us confirmation that they accepted it yet.

☝️ Please note this does not necessarily mean that the email was not delivered to the subscriber. In many cases, the recipient's host will send this confirmation after a delay. In some cases, we never receive it, and this is usually not a problem!

Typically, the best next steps for this status are the same as for the following 3 statuses (as this helps eliminate the most common issues we come across):

If a broadcast has any of the above statuses, it means that the recipient's email provider accepted the email, and from there we no longer have control over it.

It's up to the recipient's host to place the email, such as in the inbox or spam folder.

The next step is to gather some more information from the subscriber directly:

Scenario 2: the broadcast doesn't show up in their email history

If you're unable to locate the broadcast in the subscriber's email history, then this indicates that it was never attempted to be delivered to that subscriber. The most likely scenario is that the subscriber was excluded from the recipients at the time of sending.

To verify this, first duplicate the broadcast that the subscriber didn't receive. (Click into it from the broadcasts page, then click 'Duplicate' from the sidebar.)

Once you have the duplicate in your account (it'll be created as a draft), navigate to its recipients page to view its subscriber filters. The filters of the duplicate will be identical to those of the original send.

Here's an example of how those filters might look: 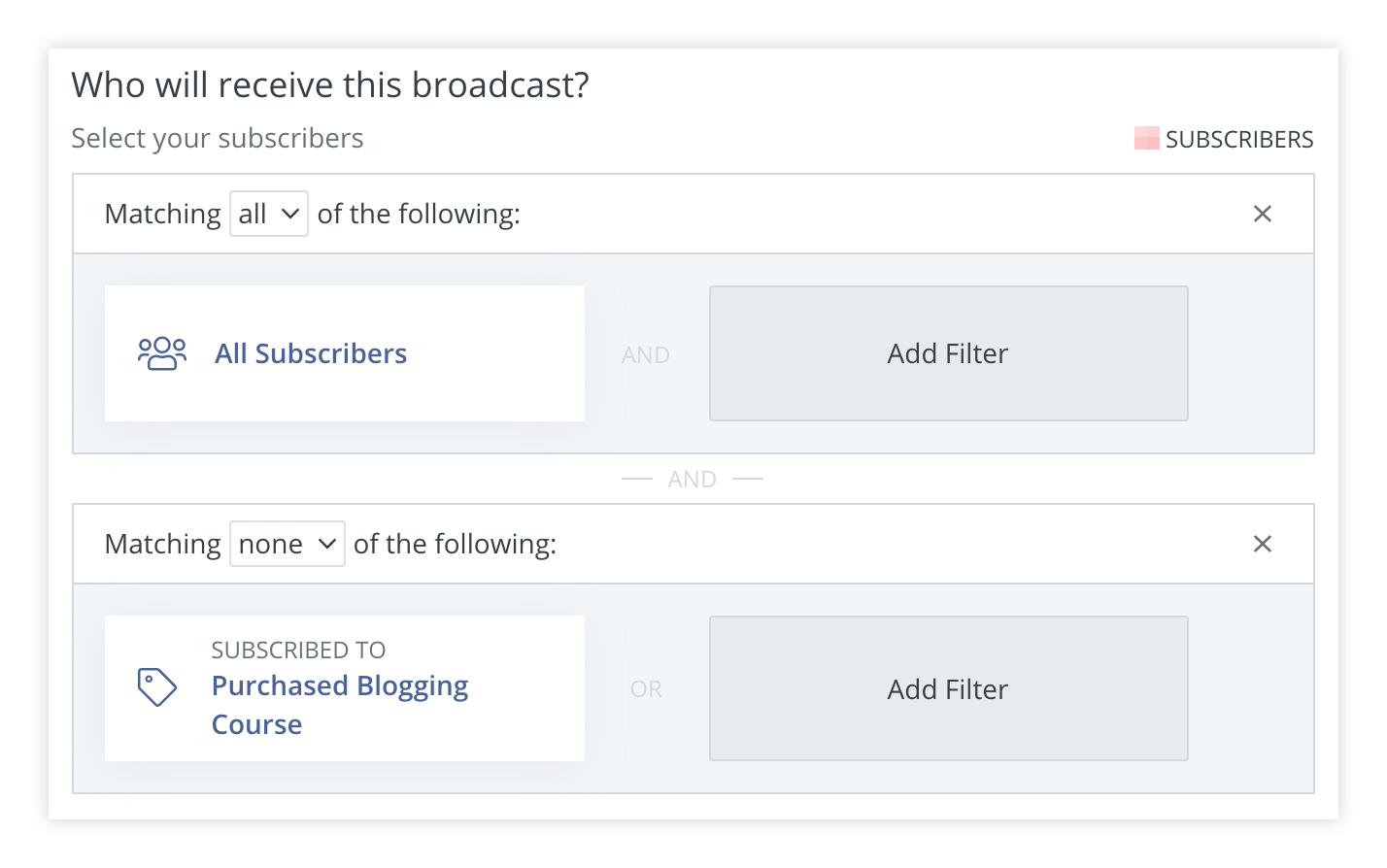 Using this information, you can determine whether the subscriber in question fit those criteria at the time that broadcast was sent.

☝️ TIP: Try creating a segment in your account with the same filters that you used for your broadcast send. If your subscriber matches those criteria, they should be included in that segment, as well. This can be a handy litmus test!

Don't forget that your subscriber will have needed to match the sending criteria at the time that the broadcast was sent. You can verify the date & time that a particular tag was added by hovering over it from the sidebar on the subscriber's profile: