What you need to know to get started with Visual Automations

Now that you've hopefully gone through and familiarized yourself with Actions, Events, and Conditions in Visual Automations, you should be set to learn some guidelines.

1. Subscribers can be in multiple Automations.

Get your creativity on, because you can run Subscribers through more than one workflow, at the same time!

2. Subscribers are taken out of an Automation when they get to the end.

NOTE: New steps you add later will not be taken be previous subscribers, only new ones.

3. Automations take Subscribers out of Sequences when they finish all the Published emails.

Note: At ConvertKit, the term "subscribed" and "unsubscribed" are used a bit differently than what you might be used to. "Subscribed" means a Subscriber is subscribed TO something. This applies to Sequences, Forms, and even Tags, they are subscribed to that particular Sequence, Form or Tag.

Now that you understand that Subscribers can be subscribed to multiple things in your account, take note that them being "unsubscribed" from a Sequence doesn't mean they have left your list, but rather just means they are no longer opted in to that Sequence.

In short, Visual Automations will unsubscribe users from a Sequences when they have gone through all of the Published emails, and then will move the Subscribers to the next step in the Automation.

3b.
Subscribers will skip emails in Draft. Those emails should be considered invisible rather than a holding point, or a way to pause people.

Example: If you have 5 emails in a Sequence, and you have the first 4 in Draft, and the last email Published, Subscribers will skip all the first 4 emails, only received the 5th email, and then get unsubscribed from that Sequence and move on to the next step in the Automation.

4. Events can only affect Subscribers within an Automation.

Events will only happen for Subscribers that have already entered into the Automation. If you have a Tag added event in the middle of your Automation, it will not pull Subscribers to that point if they haven't entered from the beginning entry point. The Subscriber must currently be in the Automation when the Event occurs to pull them forward. 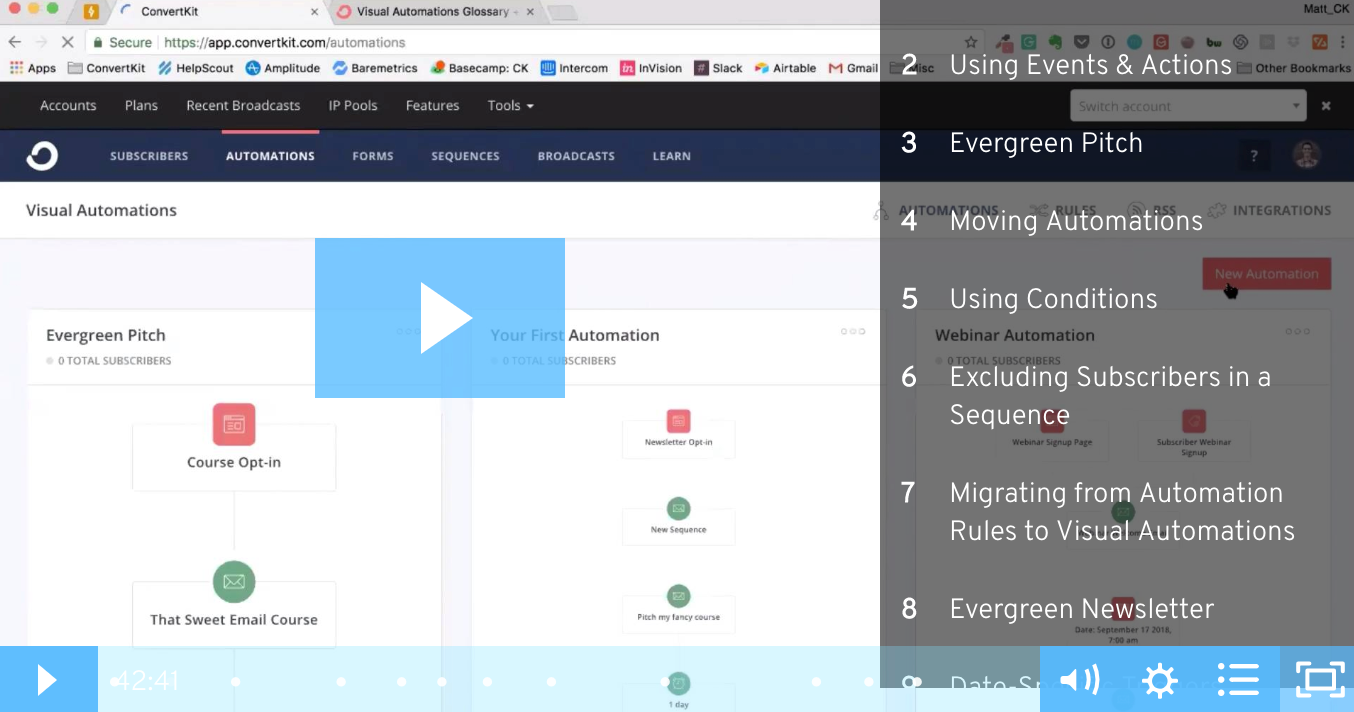 As with anything new, there are always a few questions. We’ve included lots of FAQ’s here:

"How do I migrate my other automations from another email marketing service?"

We’ve got a tutorial just for you! You’ll want to read this to get started.

"How do Broadcasts tie in?"

"If an Event happens, do Subscribers who are passed that step go to the Event?"

Nope! You cannot go backwards in an Automation.

"Can I create Automation rules that drop Subscribers into an Automation?"

Yes, if you use an Event in the workflow, such as adding a Tag.

"Do I lose reporting functionality in Automations?"

Nope! Reporting will remain as is, within your account. Sequence reports for example will show the lifetime reports for that Sequence—so this will include stats on Subscribers who may have been added to this Sequence some other way, outside of this Automation.

Subscribers won’t be able to re-enter a Visual Automation until they’re in a completed state for that Automation, which can be caused reaching the end of it or being moved out of it by a move-to-another-Automation action.

So if a Subscriber is currently going through a sales funnel Automation, for example, and another Automation tries to re-add them to that funnel, nothing will happen. But if they’ve already reached the end of that funnel, and then get re-added to it by another Automation, then they’ll re-enter the funnel from the start. (We won’t send them any Sequence emails they’ve already received, though — unless that sequence is set to be repeatable!)